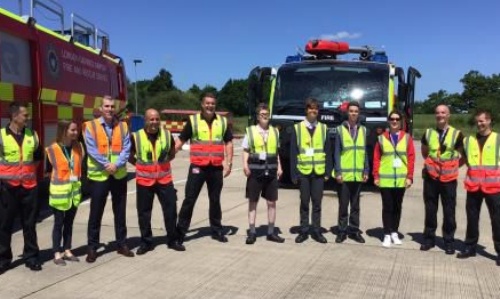 It’s been a busy term of Science, Technology, Engineering and Maths (STEM) at Woodlands Meed, which has seen pupils of all ages participate in some exciting, challenging and creative activities on and off site.

As part of Mid Sussex Science week on the 17th June, Woodlands Meed students were invited by Burgess Hill Business Park Association to The Kings Church in Burgess Hill to take part in a fantastic collaboration between local schools and local companies to enthuse the next generation of Engineers and Scientists. Other schools from the Burgess Hill area also attended. Each school was partnered with a local business to develop a project based upon science, technology, engineering and maths. The goal of the event is to encourage Science, Technology, Engineering & Maths among ten year olds. Research shows that interest often drops off after this age in STEM subjects. The aim is to show how interesting and what fun STEM subjects can be.

On the 30th June a BigBang@Schools event funded by Engineering UK and supported by The STEM Hub was facilitated at Woodlands Meed for KS3 and primary pupils to participate in. This included the exciting Science Magic; Magic Science Show presented by Ian B and AI and Colour Change workshops facilitated by The STEM HUB. The Big Bang event provided the Woodlands Meed pupils with inspiring opportunities to engage with Science and with STEM professionals. The pupils really engaged with the activities and it certainly brought the world of STEM to life.

Other STEM activities that have happened this term include a trip to Gatwick Airport to learn about the different roles there are at Gatwick. The trip was organized by Louisa and Dave from Gatwick who have been leading our science enrichment club at Woodlands Meed and it was fantastic that pupils got to visit them at Gatwick. Pupils found out about the different roles there are at Gatwick and the highlight of the visit was being allowed to spray water from the fire engines!

Vehicles Day was another highlight of this term. Pupils had an engaging and exciting vehicles day, all the pupils worked amazingly well in groups to build a vehicle to see whose vehicle would travel the furthest. There was a wide range of creative vehicles and Dave from Gatwick joined us to support with the judging, he had a difficult task on his hands.

We had the amazing opportunity to participate in a STEM day at Hurst where both Woodlands Meed and Hurst pupils worked together to build a structure to transport their tomatoes over 'water', whilst avoiding them becoming squashed! The collaboration and teamwork between the pupils was brilliant and our pupils really enjoyed their day at Hurst.

Another all action day was our pupil’s trip to Plumpton College. They learnt about the different courses and had the opportunity to drive a tractor simulator. They also carried out an investigation with mice and scents. The pupils then finished off the day with making sausages.